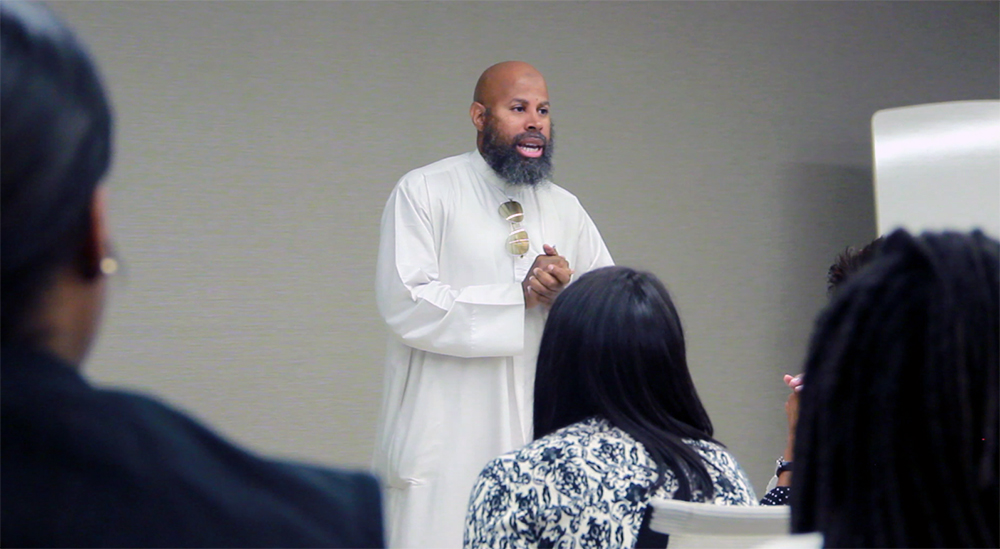 Abdul-Hakim Muhammad As-Salafee has traveled a non-traditional path from working in the Philadelphia Prison System to the University of Pennsylvania.

Now a rising senior and a sociology major in the College of Liberal and Professional Studies who lives in the West Oak Lane neighborhood of Philadelphia, As-Salafee started his career helping others in the Philadelphia Prison System. As the head chaplain for the Muslim community for nearly a decade, at times he found the job overwhelming. But, it was his passion to help others become more resilient.

As he was about to graduate from the Community College of Philadelphia in 2012, a chance encounter in the hallway led to a life-changing moment.

As-Salafee stopped to chat with Aram Terzian, one of his professors at CCP who had earned hisdoctorate in social work and bachelor’s degree from Penn, and talked about his plans to relax that summer.

Terzian vehemently argued: “No, you’re not. You’re going to Penn.”

As-Salafee soon met with personnel from Pipeline for Promise, a program administered through Penn’s School of Social Policy & Practice.

“Those who developed the Pipeline for Promise — Claire Lomax of the Lomax Foundation and professors Anthony Bruno and Richard Gelles — believed that, if those who have historically been underrepresented in the social work profession and at Penn were provided exposure, access and support, they would come and they would succeed,” says Caroline Wong, the director of Pipeline for Promise and senior associate director of the master of science in social policy program. “Abdul-Hakim’s performance and drive validate their theory and reflects the increasing access element of the Penn Compact 2020.”

For nine years, Pipeline has provided opportunities for underserved students from community colleges to take a free course during the summer months. Students learn about social work as a profession, time management, fiscal responsibility and other life skills that extend beyond the classroom.

“Going through Pipeline for Promise was one of the best decisions that I’ve ever made,” As-Salafee says. “They have given me a makeover. It was a boost to another level of maturity, and it built my level of self-esteem and confidence.”

When the Pipeline program was wrapping up, he applied and was accepted into Penn’s College of Liberal and Professional Studies.

“There it was: an acceptance letter in my e-mail on a Friday,” Muhammad says, as tears of joy fill his eyes, even now. “It was like winning the Super Bowl or the World Series.”

A devout Muslim, As-Salafee recalls the day with reverence. He says Fridays are special days and receiving an acceptance letter from Penn on that day in 2012 made it all the more memorable.

“It’s like a dream come true,” he says. “It was something that I wasn’t expecting.”

Today, he is a member of the LPS Student Association and maintains its Facebook page, where he’s able to help new students make a smooth transition to campus life.

Still 10 months away from graduating with his B.A. in sociology, As-Salafee has already received a job offer as a consultant at a home for people with physical and mental disabilities.

As-Salafee says the skills that he’s acquired at Penn all started with the Pipeline program.

“It was something that I needed in life. Pipeline helped me to get more organized and see things for what they are worth,” As-Salafee says. “The things I should be involved in, where can I be the greatest asset, where can I help people the most to become more resilient and take on new challenges — Pipeline helped with all of that.”

Among those he acknowledges as having been instrumental in helping him at Penn are Kathy Urban, LPS director, and three of his teachers, Deidre Martinez, Roger LeGrand and Gary Bertholf.

Looking forward, As-Salafee has ambitious goals that include continuing his volunteer work with the Center for Male Engagement at CCP, serving as a spiritual advisor for incarcerated people and writing a book about his journey from working in the prisons to studying in the Ivy League. He also hopes to earn a doctorate, which he says he plans to personally hand to his mother Gloria Crumbley, to whom he credits his success.

“I consider her my best friend. She believed in me when nobody else would. She’s a beautiful, brilliant lady who never gave up on me,” As-Salafee says. “I want to hand that degree to her and say, ‘Mom, this one’s for you.’”