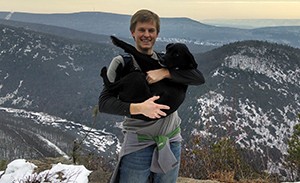 Maintaining the quality of the environment and making our blue planet a little greener is vital. So we’re pleased the individuals that go the extra mile to do so are gaining recognition from Penn’s Division of Human Resources (HR).

HR recently announced this year’s Models of Excellence Program Award winners, and we’re proud to say that School of Social Policy & Practice (SP2) staffer Aldis Kurmis is on one of the winning teams.

The Penn Green Campus Partnership (PGCP) was awarded for the above-and-beyond contributions of each team member in assisting in the achievement of integrating sustainability into coursework, community, and campus planning, design, and operations.

Kurmis has served on the team as SP2’s designated sustainability coordinator since 2012.

“I was really excited for our team. There are many on the team that put in a lot of work and really deserve the recognition,” said Kurmis, adding that the group has been highly inspirational to him. “They are all vastly more knowledgeable about the issues than me and it’s an opportunity for me to learn a lot from them. Their motivation is incredible.”

Before joining SP2 as a grants manager, Kurmis’ professional background and education were centered on natural resource management; he recently completed a MS in Applied Geosciences.

“Even though my job as SP2’s Grants Manager was a move away from that career path, I still wanted to stay involved with environmental issues and initiatives,” Kurmis said.

Among PGCP’s accomplishments and undertakings, Kurmis mentioned their participation in the campus-wide Power Down Challenge in February. Kurmis enrolled SP2’s building on 3815 Walnut Street into the competition and coordinated efforts to reduce electricity use.

Additionally, a class of 1977 gift made it possible to transform the backyard of 3815 from “a cracked asphalt lot to a beautiful and usable greenspace,” according to Kurmis. “Participating in design and construction meetings between SP2, FRES, and the project’s landscape architecture firm as the school’s sustainability coordinator was really exciting.”

The Models of Excellence program was introduced in 1999 to recognize notable staff member accomplishments at Penn that reflect initiative, leadership, increased efficiency, and a deep commitment to service.

At this year’s ceremony, President Amy Gutmann officially recognized all of the Models of Excellence winners.