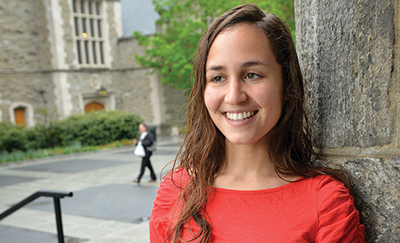 PSCSW gives awards annually to graduating master’s level social work students who submit a case based paper for review by a panel of judges.

Martínez Muñoz’s outstanding paper was titled “Lin and the Russian Poet: The case for writing as a transitional object & the power of a corrective emotional experience.” Her practice professor was Steven Wilmot.

“By the time I submitted the paper, I had put months of work and research into writing it… I experienced a sense of catharsis and a deepening of my understanding of my work with my client,” Martínez Muñoz said. “When I received the call that I had received the first prize, it was just icing on the cake of a rewarding experience.”

“I would like to recognize the exceptional experience of working in a placement such as the Counseling and Psychological Services of Penn,” Martínez Muñoz added. “I highly encourage any SP2 students who have a deep interest in clinical work and receiving unparalleled supervision to apply for this internship. To be able to work with a truly diverse population under a highly compassionate and knowledgeable supervision was the highlight of my time at SP2.”

Martínez Muñoz added that she looks forward to a career in a college counseling center where she can continue to work with young adults and international students.

“Professor Werner-Lin encouraged me to apply. Both of my practice professors, Professor Werner Lin last year and Professor Malitta Engstrom in my foundation year, were both helpful and supportive graders. Papers came back with thoughtful and usable feedback that was really helpful as I learned to think and write about clinical theory and practice. It was clear through their grading, availability outside of class, and classroom engagement their commitment to our learning process as new clinicians, and those are motivating qualities.”

Weisman has kept busy since graduating in May. Most recently, Weisman says she has been spending time in Honduras discussing strategies to support a multi-disciplinary, child-focused approach to help children crossing borders as well as promoting the role of social work in family-centered work with vulnerable children internationally.

Awardees were chosen based on their case studies and the ability to both integrate theories of human behavior with practice in clinical social work and explore clients’ problems within a bio-psycho-social context, among other things.

The PSCSW Awards for Clinical Excellence were established to acknowledge the outstanding clinical work of students and is open to all graduating Masters of Social Work students in Pennsylvania. The program is dedicated to four distinguished PSCSW leaders who have provided inspiration for future clinicians: Patricia Burland, Mary Montague, Judith Kasser, and Anna Wiggins.