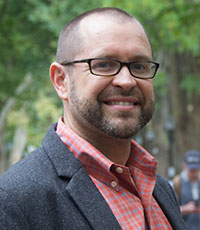 Jason Miller brings 17 years experience as a Social Work leader in a variety of nonprofit and community organizations. He received a BSW from Goshen College in 2000 and a MSW in 2006 from the University of Pennsylvania School of Social Policy and Practice.

Since 2006, Jason has had four executive leadership positions. The first position was at a youth focused non-profit called Youth Connections located in Franklin, Indiana. He was the Associate Executive Director at Youth Connections. From 2009-2014, Jason was employed at Bethesda Project as the Associate Director, Clinical Services. In this role Jason provided clinical supervision, agency planning, agency evaluation, and staff training to Bethesda Project’s fourteen homeless/housing/social service programs. From 2014-2017 Jason was the Executive Director of Ready, Willing & Able Philadelphia.