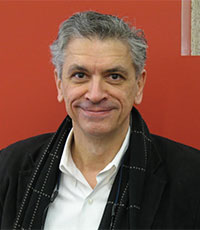 Andrew Lamas joined the faculty in Urban Studies in 1990, and the longstanding focus of his critical pedagogy, research, and writing is poverty, inequality, and alternative economy. He is Core Faculty in Gender, Sexuality & Women’s Studies (GSWS) and the Alice Paul Center, he participates in the GSWS Global Gender Group, and he is Faculty Affiliate of the Lesbian Gay Bisexual Transgender Center. His courses are cross-listed with numerous departments, including Africana Studies.

He serves on the board of the Bread & Roses Community Fund (which has distributed more than $11 million to organizations in the Philadelphia area working for access to health care, economic justice, a clean, safe environment, civil and human rights, racial and economic justice, and peace). He is on the editorial board of the Radical Philosophy Review—the journal of the Radical Philosophy Association. He is the website editor and a founding board member of the International Herbert Marcuse Society.