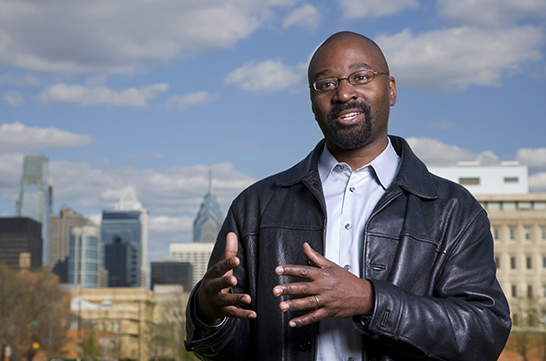 Penn President Amy Gutmann and Provost Vincent Price today announced that John L. Jackson Jr., the Richard Perry University Professor at the University of Pennsylvania and Senior Advisor for Diversity in the Office of the Provost, has been named dean of Penn’s School of Social Policy & Practice. His new position will become effective July 1.

Jackson, who has primary appointments in the Annenberg School for Communication and the School of Arts and Sciences, as well as a secondary appointment in the School of Social Policy & Practice, is a noted cultural anthropologist who has written and taught about the impact of mass media on urban life, globalization and the remaking of ethnic and racial diasporas, and racialization and media technology.

“John is a distinguished teacher, a renowned scholar, and a visionary leader whose work crosses traditional academic boundaries and involves community partners in understanding and confronting societal challenges around the nation and the world,” Gutmann said. “He is the best person to advance the School of Social Policy & Practice toward its goal of becoming the leading center for interdisciplinary teaching and research on social innovation, impact, and justice.”

Jackson joined Penn in 2006 as its first Penn Integrates Knowledge (PIK) University Professor, a program developed to recruit preeminent faculty who have appointments in two Penn schools and who harness tools from different disciplines and professional perspectives to address compelling societal challenges. He has conducted fieldwork in Harlem to understand cultural and economic diversity in contemporary New York, analyzed the impact of language on race relations, and explored the use of technology by African American religious and spiritual communities. His scholarly work has been funded by the National Science Foundation, the Ford Foundation, and the Lilly Endowment.

“John has the vision, energy, and skills to continue to strengthen the School of Social Policy & Practice, to help deepen its relationships and partnerships across the University and with communities locally and globally, and to further position it as a critical contributor to our vision of Penn as the model of an inclusive, integrated, and impactful university,” Price said.

An accomplished filmmaker, Jackson has produced a feature-length fiction film, documentaries, and shorts that have screened at film festivals internationally. With colleagues from the Annenberg School and Penn’s Graduate School of Education, and working closely alongside community members, he also helped createCAMRA, an interdisciplinary group of researchers and educators committed to participatory, experimental media making.

“I am so incredibly excited about this opportunity,” Jackson said, “and I look forward to working with the faculty, students, staff and alumni of this impressive and inspiring school as they continue to demonstrate the value of putting cutting-edge scholarship, research and theory in service to the public good.”

Jackson earned his B.A. in Communication summa cum laude from Howard University as a University Merit Scholar and received his M.A., M.Phil., and Ph.D. with distinction in anthropology from Columbia University. He was a Junior Fellow in Harvard University’s Society of Fellows and a faculty member in Duke University’s Cultural Anthropology Department before coming to Penn where, in addition to his appointments in Anthropology, Africana Studies, and Communication, he is also affiliated with the School of Social Policy & Practice, the English Department, the Graduate School of Education, and the Penn Institute for Urban Research. In 2009, Jackson served as a Visiting Professor of Law at Harvard Law School.

Jackson has served as program chair for the American Anthropological Association’s annual conference and on the editorial boards of highly respected journals, including Cultural Anthropology, Cultural Studies, and Souls: A Critical Journal of Black Politics, Culture, & Society.

Jackson succeeds Richard Gelles, who has served with distinction as dean since 2001. “We are confident that John will build on Rich Gelles’ strong legacy as dean and be an outstanding and supportive leader and partner to the School’s faculty, students, staff, and alumni in the years ahead,” Gutmann said.