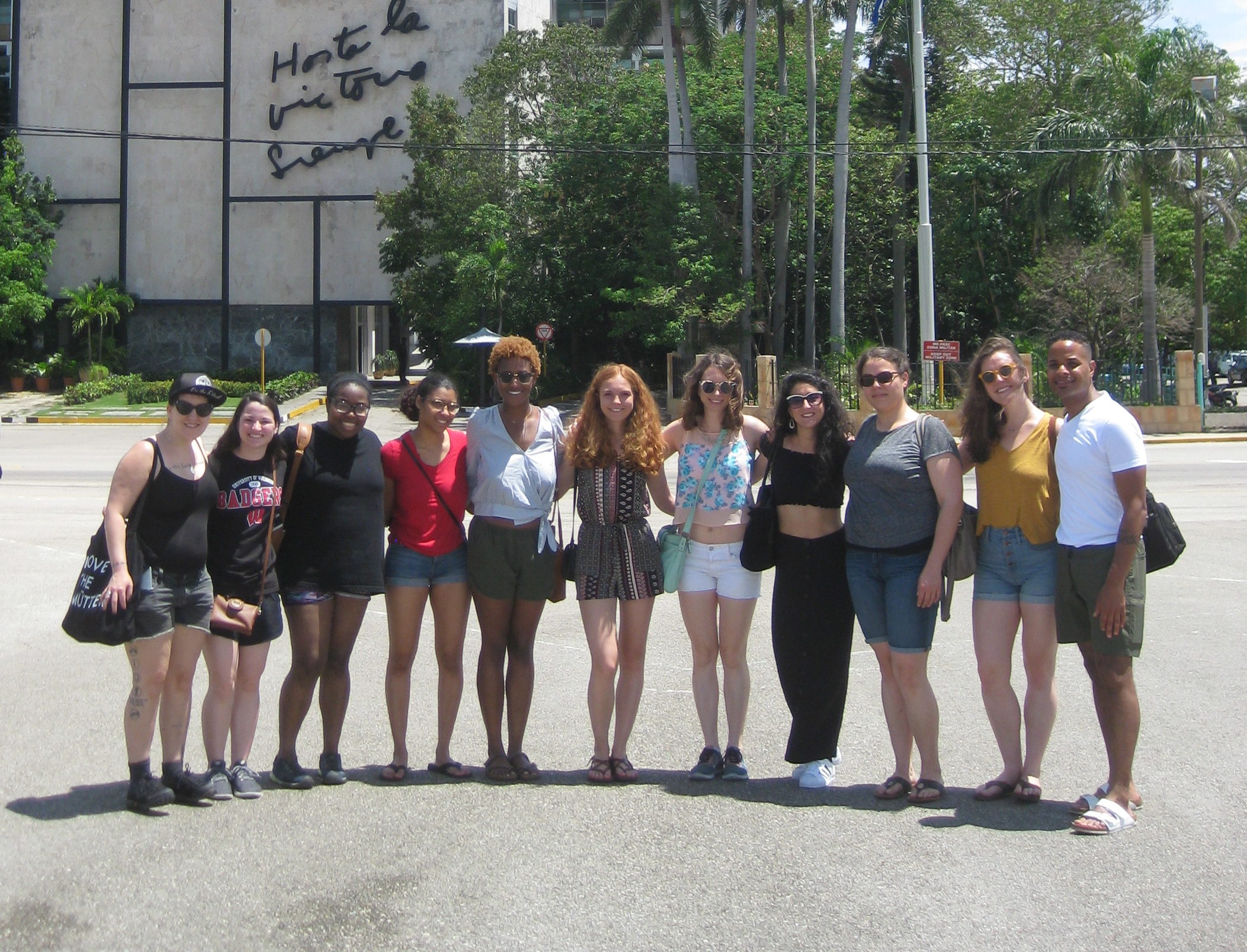 The following chronicle was written by Azahara Palomeque, a poet, writer, and Associate Director of the Master of Science in Social Policy Program at Penn’s School of Social Policy & Practice (SP2). Palomeque is also a lecturer at SP2 and holds a PhD in Spanish and Latin American Cultural Studies from Princeton University.

Cuba, May 2018. I breathe. As we leave the José Martí International airport for the city of Havana, a gust of tropical wind strongly smelling like gas hits my nostrils: it’s like a mix of sultry heat with pollution moving under a fierce sun pushing behind an emergent storm. The taxi driver, Rolando, is waiting inside his hooked-up car from the fifties. He will be taking us to the students’ “casa particular”, where we will meet with the group and start planning for the following days.

My colleague Ezekiel Dixon-Román, Associate Professor at the School of Social Policy & Practice, and I have been working on a new global seminar that aims to provide students with deep knowledge of Cuban contemporary social policy, as well as with the opportunity to understand the country’s revolutionary history, idiosyncrasies and identity politics, including race dynamics. From the course title – Whose Colony? – underlies a question of sovereignty pertaining to the island’s colonial past and complex relations with the United States. To the challenges that every educator encounters when designing a course, one must add those that come with facing a new social, economic, and national reality. If anything, this must be a course on cultural translation – I mutter, while swinging my upper body to the reggaetón song Rolando just put on. On the road there are cars that belong to all epochs: ours precedes the 1959-Revolution, older models of European cars from the eighties and nineties circulate with us, some modern taxis remind me of the U.S. – “ah! those are government-run”, affirms Liset, our guide. There is nothing frozen in time about Cuba – I tell myself –, rather different ages and time-zones seem to be running parallel, simultaneously over those untidy highway lanes. The smog – I will learn later on – is caused by the continuous palimpsests the cars themselves represent: many of them operated by truck engines.

Democracy, election slogans, Martí’s image on murals and billboards. Thanks to the readings we did at Penn, the students are already familiar with some of these references: the first Cuban president born after the Revolution whose name is not Castro, Miguel Díaz-Canel, who has just been elected a few weeks before our visit; José Martí, the intellectual and ideologist of the Independence movement, who the Cubans call “apostle” and I have come to translate as “founding father”. Little by little, they have been acquiring the tools to establish connections between the academic materials and their initial contact with the Cuban reality. Our first dinner together takes places at a restaurant whose vegan options are scarce and where the waiters insist on having us taste their typical cigars while showing pictures of past honorary guests: President Obama, Beyoncé. In a repurposed colonial house whose walls are covered by framed photographs and a collection of non-functioning wall clocks, again, time becomes a haunting concept. A stale smell of ancient furniture – “vintage” does not exist – competes with the cooking spices’. Our grasp of Cuba seems to have to cross first the sensorial realm before reaching any sort of cognitive space. As Jeanine Stewart, a MSW student, puts it: “peeling paint gave buildings of beautiful hues, from light aqua to lavender, a look of textured and antiqued magnificence”, before she goes on describing the goal of her final paper: “I wanted to understand Cubans experience of their health care system, a question that led me to Art Brut, a project serving clients with mental illnesses with an interest in art”.

In Cuba, one must make an effort to overcome first impressions brought by the senses in order to rationalize the ongoing consequences of a revolutionary regime that made education and universal health care a priority while suppressing any form of political dissent. Our conversations – it couldn’t happen otherwise – are heated: every class brings on new topics to discuss, which are complemented by the activities in the program: a visit to the Literacy Museum – monument to the massive Campaign which eliminated illiteracy in one year, 1961; a talk with a real estate lawyer who explains the market’s opening up in 2011; a conversation with an activist and employee of CENESEX (the Cuban National Center for Sex Education), who could not explain the interplay between race and prostitution. This panoply of social issues gives the students options to focus on a variety of policy-related themes. Some of them are interested in the Cuban education system, its quality and gratuity, while questioning the ideological component of the pedagogic experience; others on food accessibility and a new eating culture partially motivated by the evolution of the ration card. One student is investigating the management of HIV patients from the old days when they were placed in sanatoriums to the contemporary, de-criminalized approach, in which they receive medical care and attention at home. She insists on going to an LGBT night club called “Las Vegas”, where messages promoting the use of condoms appear on big screens in-between shows – at 3am, as the group walks back to the “casa” through the safe streets of Havana, exhausted and happy from so much dancing, she carries her precious notes in her purse.

Most of the time – Ezekiel and I notice – their inquiries are bi-directional: what can Cuba teach me about my American identity? How can I embrace Cuba from my U.S. lens without letting preconceived ideas undermine the cross-cultural experience? In that respect, Gerolly Lorenzo, a MSW student who decided to explore the intersections between medicine and the Afro-Cuban religion of Santería, states: “It was wonderful to learn about our history from the Cuban perspective and witness the optimism and spirit of the Cuban people despite the many ways they have been isolated by the U.S. embargo”. Taylor Crumpton, also a MSW student, underlines the value of meeting with the Afro-Cuban female rappers La Reyna y La Real, since “their artistry illustrated . . . the shared relationship between people of the African Diaspora and hip hop music”. In all of us, there seems to be a question about the self that gets pierced by the transnational encounter while honoring the foreign as both a constitutive and a destabilizing element. In my case, a Spanish-born citizen settled in the United States and teaching in Cuba for the first time, the multicultural triangulation meets the intergenerational responsibility of coloniality and empire. Among the grand narratives that, collectively, we try to dismantle is the well-known dichotomy “development” vs. “underdevelopment”, one relegating many countries to a position of backwardness according to a Eurocentric model of power-knowledge where Cuba is often placed in a time capsule. Gerolly feels “inspired [by] how the complicated U.S./Cuba relationship often creates innovative possibilities instead of limitations” among Cubans, including “el paquete!”. In a way, el paquete (the package) – a weekly subscription of pirated media content that travels from the U.S. to the island and circulates in a hard drive – is a refutation of such capsule, as well as a proof of the Cuban people’s thirst for information.

There were plenty of memorable moments – our visits to the many cultural sites, including Hemingway’s house, our interaction with academics, artists, and other professionals – but, above all, I believe there was a pervasive feeling of homeness, a perception of commonality, shared history and safety that made the experience not only apprehensible but actually really enjoyable. Taylor, remembering La Reyna y La Real’s concert at their house, states: “When they performed, I felt like I was home”. One evening, from a hotel lobby – one of the few places where Internet was accessible – I called my mother at 1am in Spain being completely oblivious of the time difference, as if Cuba and my native country were all of a sudden located on the same meridian. Another day, a Cuban family, friends with Ezekiel, invited the entire group for dinner at their place; between the rice and beans and bites of banana chips, Cecilia captivated us with her stories. A doctor with more than 20 years of experience, currently practicing in Cayo Hueso, she shared her expertise within the Cuban health care system. By the time we decided to leave, I recall her exclaiming effusively from her apartment’s threshold: “don’t hesitate to come back, this is your home!” And we will be back, to the country where time is a mystery: we are no doubt still there.