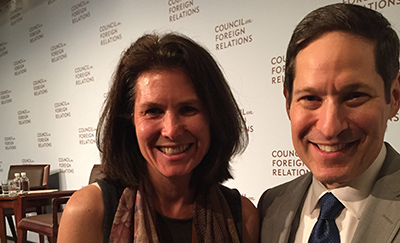 Jennifer Prah Ruger, PhD, associate dean for Global Studies at SP2, recently participated in the Council on Foreign Relations’ 2016 National Conference in New York. Several notable speakers were in attendance, including Timothy F. Geithner, Andrea Mitchell, and Joseph F. Dunford, Jr, chairman of the United States Joint Chiefs of Staff. Also in attendance was Thomas Frieden, director of the U.S. Centers for Disease Control and Prevention (CDC). Ruger previously served on the Ethics Subcommittee of the Advisory Committee to Director Friedman at the CDC.

The National Conference serves as an annual opportunity to bring members from across the world together, forming a discourse around relevant foreign policy matters through discussions, roundtables, and speaking events. At the conference, a wide range of topics were addressed, including global public health, the 2016 election, the future of Europe, the U.S.-China Economic Relationship, power politics in the Middle East, and more.

“I thoroughly enjoyed discussions around foreign policy issues at the conference,” said Ruger, the Amartya Sen Professor of Health Equity, Economics, and Policy. “I was especially pleased that CFR included a session on pressing global social problems such as the conversation with CDC Director Thomas Frieden on public health at the global, domestic and local levels.”