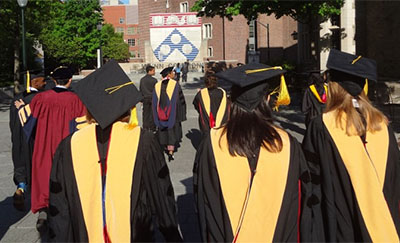 Daniel Schiff, MSW’13 – Daniel, a research analyst and data manager at the Philadelphia Education Fund, recently had a piece published in the Spring 2015 issue of Penn GSE’s Perspectives on Urban Education Journal. The article, “Teacher Networks in Philadelphia: Landscape, Engagement, and Value,” can be found here.

Lara Krawchuk, Master of Social Work – Lara currently owns a private practice in West Chester, PA that specializes in coping with physical illness, grief and losses of all kinds. Lara has also taught at SP2 for a dozen years now. Her writing has been published in books including “Techniques of Grief Therapy: Creative Practices for Counseling the Bereaved.”

Joel Caplan, PhD in Social Welfare – Upon graduating in 2008 and being appointed to a faculty position at Rutgers University, Joel developed a new spatial risk assessment technique called Risk Terrain Modeling (RTM). It is now used all over the world in areas of crime analysis, public health, pollution studies, transportation planning, urban planning, global conflict, and more. Joel says he is proud his work (No. 5) is featured in the following Forbes article: Big Data For Social Good: 5 Ways To a Higher Purpose.

Manishi Joshi, PhD in Social Welfare – Manisha is currently a University of South Florida’s School of Social Work faculty member. Last year, she led 15 students in the northeast Himalayan region in India as part of the school’s first study abroad program. Students experienced the rich diversity of northeast India, particularly the state of Arunachal Pradesh, which is home to 26 major indigenous tribes, each with its own unique customs, traditions, languages, and dresses. During this experiential journey, students visited the historic city of Delhi, and then embarked upon the adventures of northeast Himalayas. As part of the program, students documented their experience throughout the journey in this blog.

Adelia Jenkins, MS in Social Policy – Adelia researched and wrote a report for Public Citizens for Children and Youth (PCCY) on teen parents in Philadelphia’s accelerated high schools. The report, commissioned by Project UTurn and the Philadelphia Youth Network, identified barriers teen parents face to continued educational success, including limited access to child care. The report’s publication and PCCY’s ongoing advocacy have led to changes at the district and state level that make it easier for teen parents to access child care programs and stay in school.

Larkin Silverman, MS in Social Policy – In 2014, Larkin was hired as the Community Program Coordinator with Gearing Up Philly and in 2015, became the Community Liaison, coordinating community fundraising efforts throughout the city. Larkin’s recent publications include an op-ed with Elephant Journal, an online yoga and wellness site.

Adrienne Reitano, MS in Social Policy – Adrienne was recently promoted to Project Coordinator in the Office of Research and Evaluation at the School District of Philadelphia. She was also happy to report that she ran her first marathon at the end of 2014.

Share your latest news and accomplishments with SP2 Alumni. Make a submission to Alumni Notes.