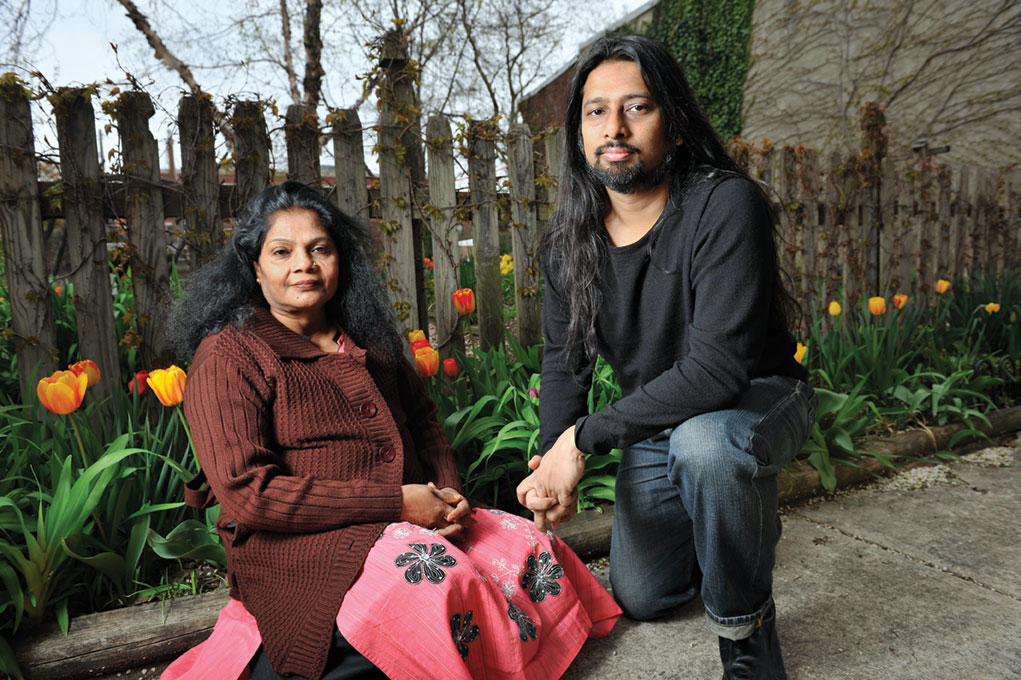 While many researchers strive to remain detached observers, SP2 Assistant Professor, Toorjo Ghose, Ph.D. acknowledges he is “not an unbiased scholar.” Ghose, whose work focuses on structural interventions in the area of substance abuse, homelessness and HIV, both in the US and abroad, is fully engaged at the intersection of research and activism.

“I’m interested in strategies that go beyond one-on-one interventions and target the structural realities that influence risk-taking and care,” says Ghose who grew up in Calcutta, India. For the past six years he has studied the impact of one such structural approach while working with a collective of sex workers in his native city. The collective, which began as a peer-led HIV prevention intervention, is now a sex workers’ union, almost 65,000 strong.

“Sex workers in India face multi-dimensional challenges and are at extremely high risk of getting infected with HIV,” explains Ghose. “By organizing, they combat the stigma attached to sex work. They transform the perception of what they do –they’re workers, not violated women who need to be rescued. Collectivizing around a sex worker’s identity helps them fight against coercive police and violent pimps, ensure safe sex practices with customers, develop banking co-ops for sex workers, build clinics and schools. Ultimately it helps them undermine the structural conditions that lead to risky practices within the community.”

The impact of this movement has been stunning. According to Ghose, rates of HIV in the collective have dropped to less than three percent, compared to rates ranging from 30 to 70 percent among sex workers in other parts of the country. Moreover, studies consistently indicate that 90 percent of sex workers in the collective use condoms in every sexual encounter with customers. A report on the collective and its initiatives authored by Ghose as part of a study funded by the U.S. National Institutes of Health (NIH) and the Indian Council of Medical Research (ICMR) has now been incorporated by the ICMR as part of the Indian government’s evidence-based intervention tool-kit.

Building on its success, the sex workers’ union has broadened its focus beyond HIV  and emerged as a political movement that responds to a variety of community issues, addressing the economic, legal, housing and parenting-related needs of sex workers. Ghose, who has worked with the group since its inception, is now involved in building the collective’s capacity to collect data and conduct research so it can advocate for its own issues. He also teaches a class where he takes MSW candidates to India to work with the collective as part of SP2’s initiative to engage communities in international settings.  Working in teams of two or three, the students collaborate with the union to develop research projects. Studies completed last year focused on the children of sex workers, sex trafficking and advocacy for the legalization of sex work. This year, two sex workers travelled to Penn to participate in a conference on Microfinancing co-hosted by Dr. Ghose at SP2. Ghose was recently awarded the Provost’s International Initiative Grant to bolster class related activities in India.

Ghose’s research-driven activism is also making a difference in this country, particularly among women released from prison who have HIV in New York city. “HIV positive females leaving prison are particularly vulnerable to homelessness and suffer from poor health outcomes,” he says. Working with Housing Works, the largest HIV housing provider and AIDS service organization in the U.S., Ghose is conducting a randomized controlled trial to determine whether housing affects health outcomes for these women. He also received a grant from the University Research Foundation to convene a group of doctoral students from SP2 to assist with the study.

“Not surprisingly, we found that housing itself is an intervention,” says Ghose. Women who obtained stable housing upon leaving prison had reduced exposure to chaos; were significantly less likely to engage in drug use, risky sex, and the exchange of sex for money; and were more likely to adhere to HIV medication regimen. Housed HIV positive women were also significantly more engaged with other types of care, including mental health and substance abuse treatment, and demonstrated increased levels of civic engagement such as voting.

This research already has resulted in additional funding for HIV/AIDS housing interventions. Ghose was recently invited to the White House by the Office of National AIDS Policy to participate in discussions around making housing an integral part of the President’s HIV policy. Moreover, he recently presented findings from his New York study at a national conference on housing and HIV where it garnered the attention of public and private funders including the Centers for Disease Control and the MAC Foundation. According to Ghose, the study also had unexpected benefits for the Housing Works case managers who assisted in its implementation. “The case managers feel that the data collection tools have improved their clinical assessments,” he says. As a result, Housing Works is now training all of its case managers to use the tools.

For Ghose, who sees his work as back-to basics social work, it is all about community empowerment. “I’m seeing that research, teaching and activism are all interconnected,” he says.